In Getting Started: Links And Linksets we went over the basics of traffic splitting links (Addue code SP). We’ll look at them in more detail in this tutorial.

Insert a new link, choosing the SP – Split Routing Link option. Set it up as below: 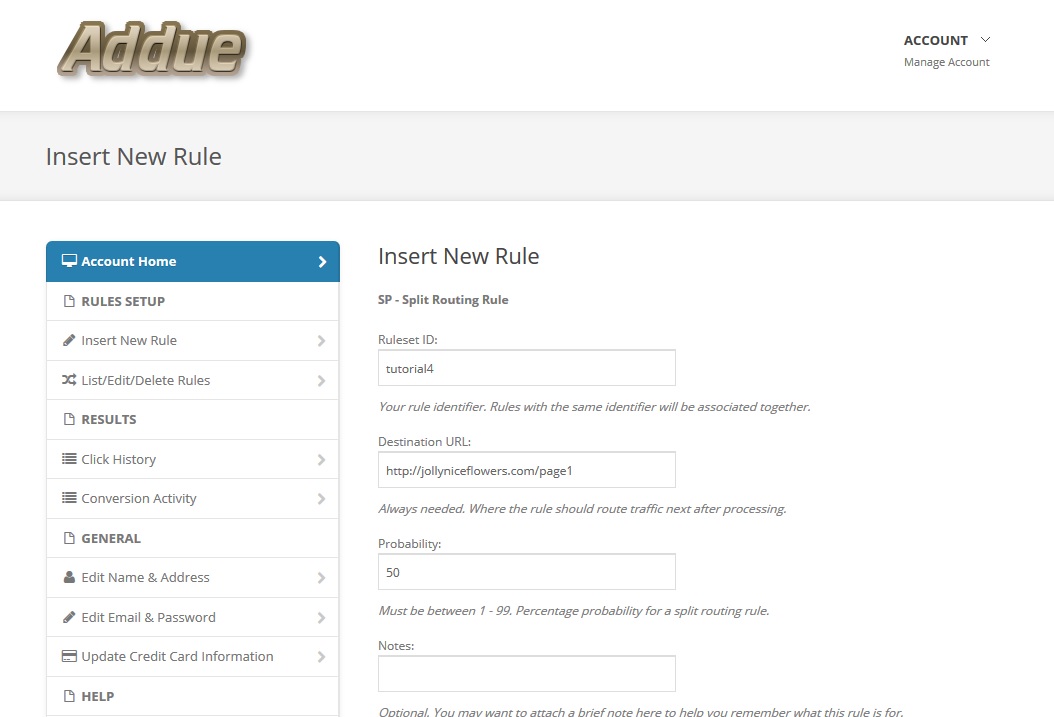 Use linkset ID “tutorial4”, destination URL http://jollyniceflowers.com/page1, and set the probability to 50 as in the form.

After you enter that link, enter a second one with the same linkset ID but destination URL http://jollyniceflowers.com/page2. Set the probability to 50 for this one also.

You’ll now have a linkset similar to the one you set up in the Getting started tutorial, except that the linkset ID is tutorial4: 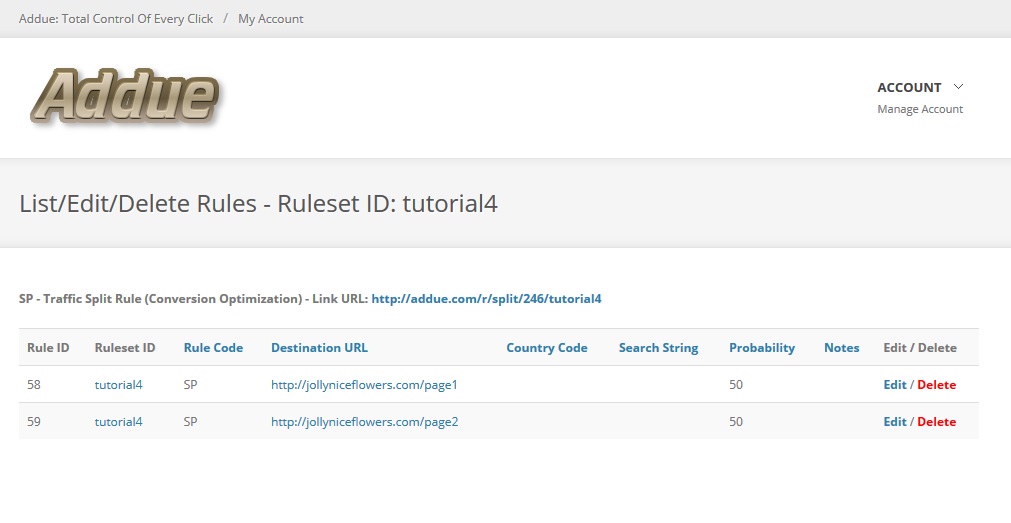 As described in the Getting Started tutorial this linkset will route traffic to the two destination URLs specified with 50-50 probability. The probabilities in that column should add up to 100. The link to invoke this link would be the one in the linkset ID page:

However you could certainly have more than 2 links. You could have for example four links, four landing pages, and each of them a probability set to 25. In this case, Addue would split your traffic equally between all four pages (25% chance of each page for each click).

There is no need for the probabilities to all be equal. If for any reason you wanted one page to come up more frequently than the others, you could give it a higher probability. For example, setting up two pages with probabilities 75 and 25 respectively will result in the first page being served three times more frequently than the second page. Setting up three pages with probabilities 50-40-10 will result in the first being served half the time, the second 40% of the time, and the third 10% of the time.

Addue is basically running a weighted probability coin flip on each click that comes in, according to the SP links you’ve set. Over a large number of clicks, the ratio in which the landing pages are served will equal the ratio of the probabilities you enter.

Strictly speaking you don’t need any DR default routing link in SP split routing link linksets. If you’ve ensured that all probabilities for all links add up to 100, Addue will never be unsure as to where to route your traffic. If you don’t enter probabilities totalling 100, however, you should have a DR link present. If for example you have a linkset with a single SP link with 50% probability and a default routing link, Addue will send half the traffic to the destination URL specified in the SP link, and the other half to the destination URL specified in the DR link. The probability ascribed by Addue to the default link is 100 – (the total of all the SP links present), which is 100 – 50 = 50% in this example. So the DR link will be invoked half the time.

Alex Bugeja is the founder of Traffikoo, an online marketing company and ad agency founded in 2005, which operates the Tracking Talk blog. Traffikoo advertises for clients worldwide, and offers the ReferDigital affiliate marketing platform, as well as marketing SaaS tools such as Addue, an all-in-one online marketing toolkit, and 123ORM.com, a reputation management tool.

We handle affiliate tracking and payments, CPA, CPS, and CPC commissions, recurring monthly commissions, and much more, and feature word-class conversion tracking. ReferDigital runs on a commission-based business model only, with no setup or monthly fees, aligning its success directly with those of merchants and affiliates.

ReferDigital is a product of Traffikoo, an online marketing company established in 2005. Traffikoo also offers Addue, an all-in-one digital marketing toolkit that features the same world-class conversion tracking built into ReferDigital, and 123ORM.com, an online reputation management tool, and some posts on this blog relate to those products.