Getting Started with Addue: Rules And Rulesets

Note: This post is an introductory tutorial to Addue (https://Addue.com). Addue is an all-in-one marketing toolkit featuring tools such as conversion tracking, A/B split testing, traffic routing by geography and other browser data, link cloaking and more. For more information, please see the Addue website.

Rules and rulesets are how you control your internet traffic using Addue. You can use any of Addue’s functionality by setting up easy-to-understand rules in your Addue account, and combine them with eachother. Rulesets are special combinations of rules which accomplish a single function. Rulesets can then themselves be combined with eachother to accomplish more than one function.

For example, you’d set up a bunch of rules and combine them into a ruleset to define one function like routing your traffic based on the country of its visitors. You could set up a separate ruleset to set up conversion tracking for your website. You could then combine those rulesets if you wished to accomplish both functions at once for your site visitors.

In this introductory tutorial we’ll talk about rules and combining them into rulesets. We’ll look at combining rulesets with eachother in a later tutorial.

We’ll use the traffic splitting function Addue provides to illustrate the concept. Traffic splitting refers to taking your incoming stream of traffic and splitting it up into multiple landing pages. The most common use case is A/B optimization, where you’d also need to use conversion tracking rules to track the conversions on each of these landing pages. For the moment we won’t be getting into any of that though – A/B optimization and conversion tracking will be covered separately in later tutorials.

In your Addue account, under “Rules Setup”, click on Insert New Rule. On the next page, choose the “SP – Split Routing Rule option”. SP is the two letter code used on Addue to refer to traffic splitting rules. All Addue rules have such a two letter code. 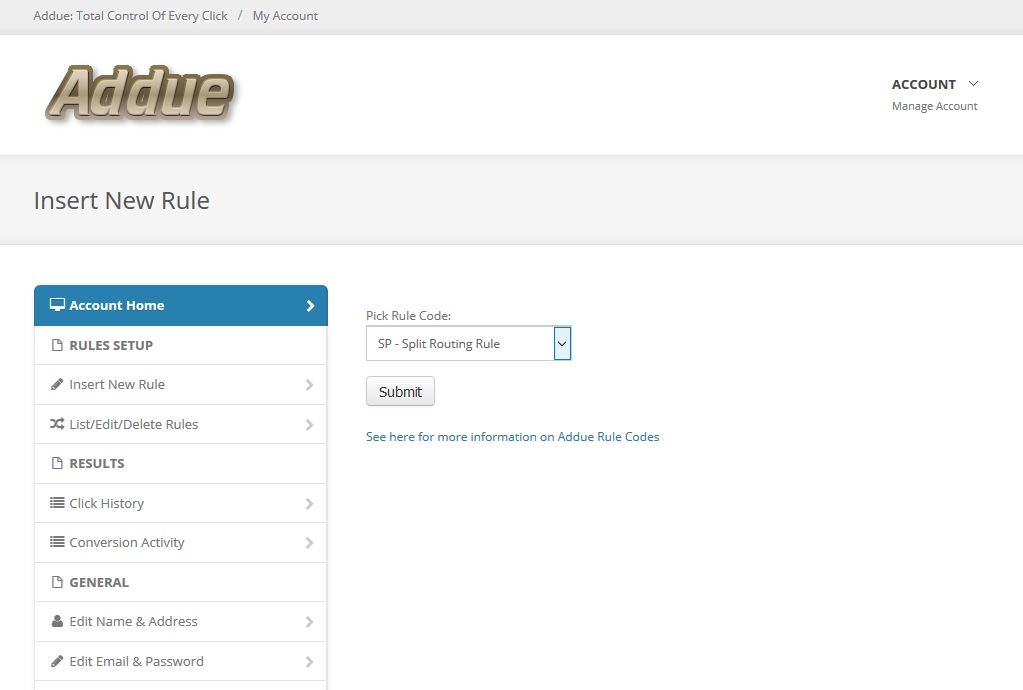 The form that comes up on the next page is where you actually create the rules. The first thing you need to enter is a ruleset ID. This is a name you come up with that uniquely identifies the traffic splitting rules you’re creating. We’ll need to create a couple of rules to accomplish the traffic splitting functionality we want, and each of them need to have exactly the same ruleset ID so they’ll be tied together. This will become clear in a moment.

Under ruleset ID, enter “tutorial1”. Under destination URL, enter the URL of the first page we want to send traffic to – http://jollyniceflowers.com/page1. Under probability, enter 50. Probability refers to the fact that you want 50% of your traffic going to this page.

Your form should look like the picture above. Leave the notes field blank and hit submit. Congrats on entering your first rule!

As the next page suggests you can hit List/Edit/Delete Rules in the left sidebar to see the rule you’ve just entered. Do that and you’ll bring up a list of rules, which at the moment just contains this one rule. Not all the columns are applicable to traffic splitting rules -some like country code are blank as you can see. But you can should see the ruleset ID, rule code, and destination URL you entered, as well as the 50 percent probability under the probability column. (You can also see something called a “rule ID” in the first column. This is just a number Addue assigned to your rule which uniquely identifies it on the system.)

If you ever need to edit or delete a rule, the Edit/Delete links on the listing page in the right hand column can be used for this.

By itself, this rule you just entered is insufficient. We just instructed Addue that half of our traffic needs to go to http://jollyniceflowers.com/page1. We now need to tell Addue that the other half needs to go to http://jollyniceflowers.com/page2. To do that, go back to your main account page (choose Manage Account from the Account tab in the top right). Then click on Insert New Rule again. Choose the SP – Split Ruling Rule option again.

We’re now entering the second rule on the next page. Under rulesetID make sure to enter “tutorial1” exactly as you did for the first rule. This creates a ruleset of 2 rules – the one you’re entering now and the one you just entered. Rulesets are rules which Addue has to process together. When traffic for your website comes in, Addue will look at both of these rules in deciding what to do with, which is you want.

Under destination URL, enter http://jollyniceflowers.com/page2 and under probability enter 50. This page is also assigned a 50% probability like the other landing page, meaning that each of them will have a 50-50 chance of being presented to site visitors. 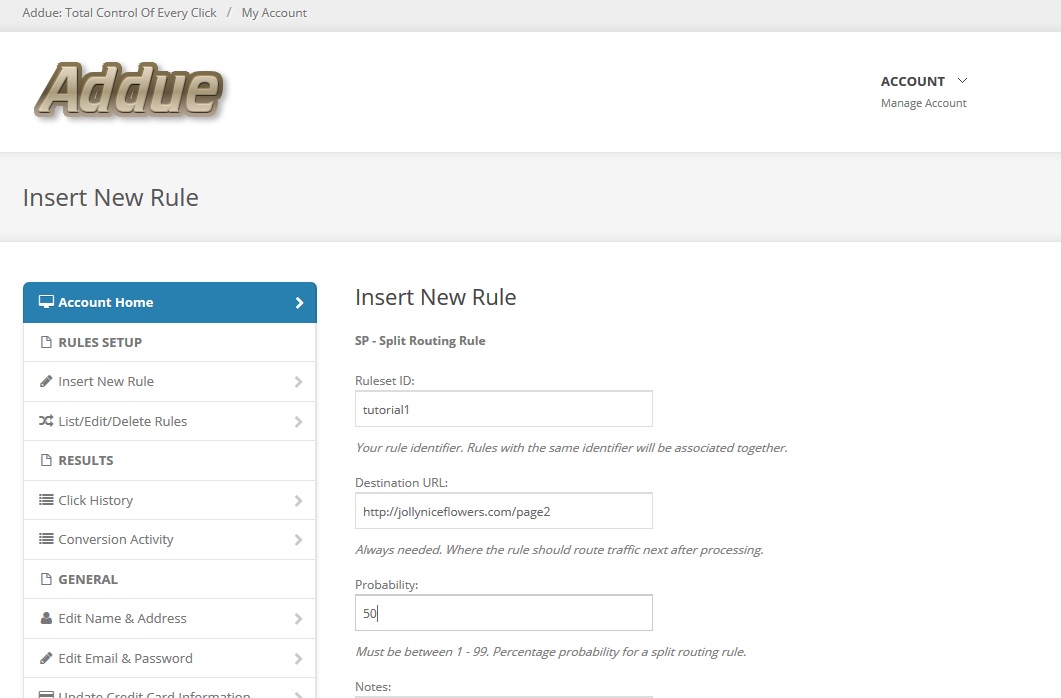 Once you hit submit you can take a look at your rules under List/Edit/Delete Rules. You should be able to see both rules you entered.

You could have a long list of rules on this page, all accomplishing different functions and assigned different rulesets. To focus on one ruleset, just click its ruleset ID in any of its component rules.

Let’s do that now. Click on the ruleset ID “tutorial1” in any of the two rules you’ve entered. This brings up a similar page like the one below: 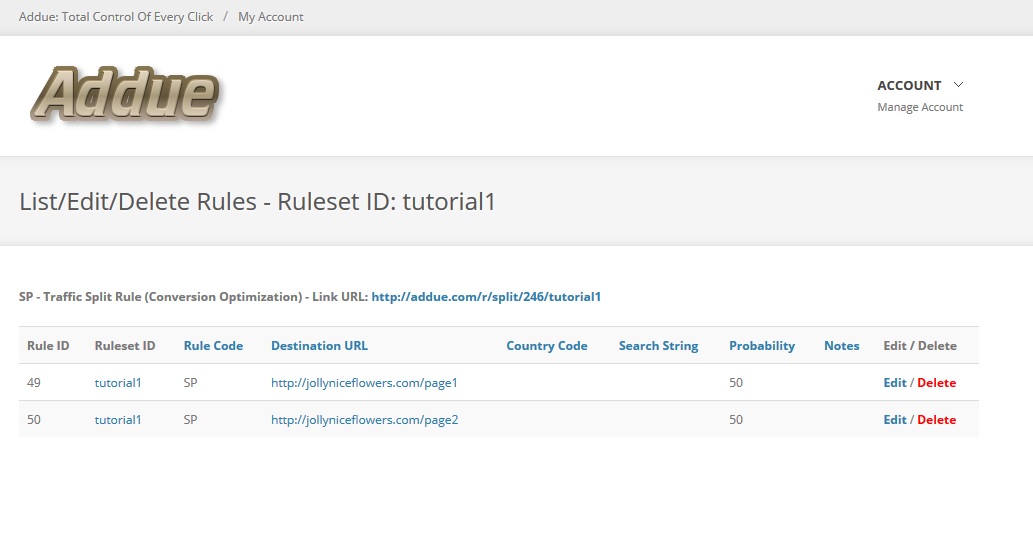 You can see the two rules in the tutorial1 ruleset defining a traffic splitting ruleset which will send 50% of the traffic to your page1 landing page and the other 50% to page2. You can also see the Addue link you’ll actually use to invoke this rule, at the top of the ruleset list:

(The number 246 between split/ and /tutorial will be different for you – it’s your unique account ID on Addue).

Click on this link a few times. You’ll see that the traffic sometimes goes to http://jollyniceflowers.com/page1 and sometimes to http://jollyniceflowers.com/page2. Addue is correctly routing the traffic in a 50-50 percent probability ratio to these 2 pages. Effectively it’s throwing a coin each time the link is clicked to figure out which landing page to use for that click.

You can also see a live report on the clicks coming in through your freshly created Addue link in your Addue account. On your account main page, click on “Click History” under the Results section to see this: 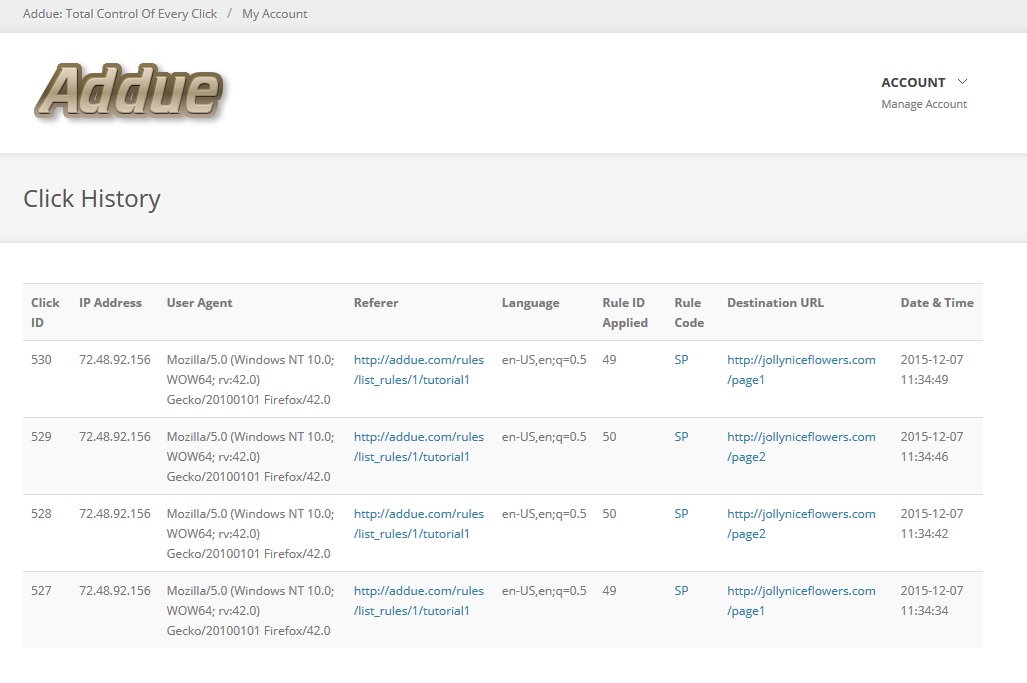 Each line on this report screen represents a click hitting your Addue link, along with other data such as the IP address it’s coming from, where Addue decided to send it (destination URL), and the rule ID applied.

And that’s it for this tutorial. We’ll start learning more about each of Addue’s available rule types in the next tutorial, starting with IP-based country traffic routing. Traffic splitting rules themselves will be examined in more detail too, in a later tutorial.

Dr. Alex Bugeja, PhD is the CEO and founder of Traffikoo, an online marketing company and ad agency founded in 2005, which operates the Tracking Talk blog. Traffikoo advertises for clients worldwide, and offers the ReferDigital suite of online selling tools and affiliate/dropship network, as well as marketing SaaS tools such as Addue, an all-in-one online marketing toolkit, and 123ORM.com, a reputation management tool.

Tracking Talk is the blog of ReferDigital, an affiliate marketing and partner management platform. Our parent company is Traffikoo, an online marketing company and ad agency which also offers Addue, an all-in-one digital marketing toolkit, and 123ORM.com, a reputation management tool.