According to Rich Dad Poor Dad Education’s latest Facebook campaign, it seems that Gen X is the way to go if you want to sell real estate education products like seminars and workshops: 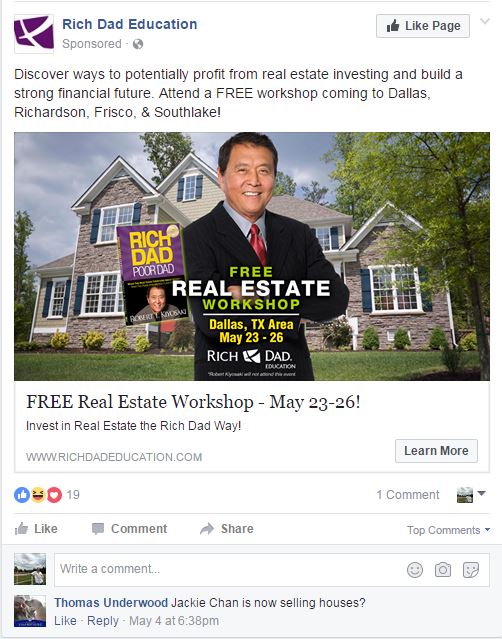 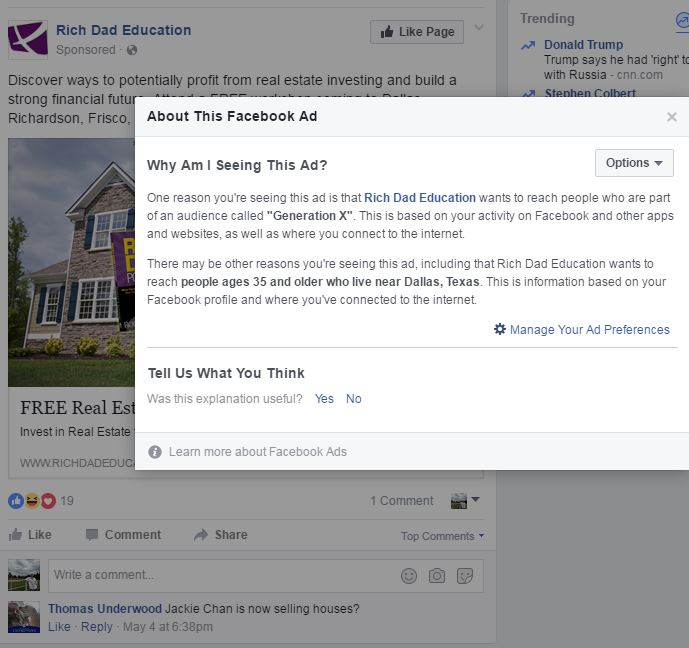 If you believe that Rich Dad Poor Dad knows what they’re doing advertising wise, that seems to be the demographic to go after in this area. The campaign is also targeted geographically at whatever city the workship is visiting, Dallas in this case.

Of course a disclaimer applies to all such live ad analyses: it might just be a piece of an experimental split test, where they’re testing a number of demographics separately to see what works best. But if we were guessing people, which we are, we’d guess that that’s a good starting point if you’re hawking similar stuff. Makes sense intuitively – over 35s are presumably wealthy enough to have built up capital for real estate down payments, whilst still young enough to dream of making it big somehow.

What do you think? Any real estate social media advertisers out there care to share their experiences?

Tracking Talk (TrackingTalk.com) is a blog dedicated to the art and science of performance marketing. Our parent company is Traffikoo, an online marketing company and ad agency founded in 2005. Traffikoo advertises for clients worldwide, and offers the ReferDigital suite of online selling tools and affiliate/dropship network, as well as marketing SaaS tools such as Addue, an all-in-one online marketing toolkit, and 123ORM.com, a reputation management tool.

Tracking Talk is the blog of ReferDigital, an affiliate marketing and partner management platform. Our parent company is Traffikoo, an online marketing company and ad agency which also offers Addue, an all-in-one digital marketing toolkit, and 123ORM.com, a reputation management tool.